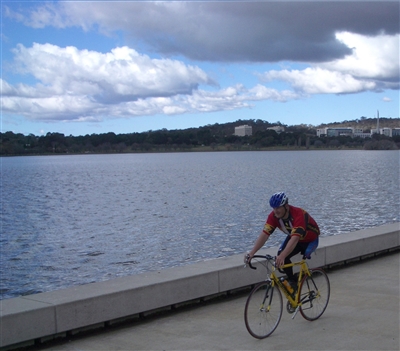 Milton normally spends March and April each year competing on the international speed skiing circuit but will stay in Australia following news that many races have already been cancelled. This will be the first season he has missed since taking up the sport four years ago when he first broke the world record for an athlete with a disability. His 2006 speed of 213.65km/hr is also an Australian open record.

Milton is saddened he wont get a chance to improve on his speed this year and says he will miss the thrill of the hill.

"At this time of year I can't wait to get on a speed skiing track and fly. It's so much fun, so frightening and a real test of my skills and my wits. But I have no say in the weather. It's a long way to go for one or two runs," said Milton.

"I have plenty to do now that I've become serious about cycling. It's great to be learning new things and training hard. I'm pretty much at the bottom on the international cycling scale but definitely moving up."

He will also spend some time working on his presentation skills. A popular speaker for corporate events, Milton is keen to develop and more physical component.

"It's one thing to talk about challenging yourself but I'm really interested in working alongside others to explore their boundaries. Walking up a hill early in the morning is a great start to a conference. Doing it with a one-legged guy makes it that much more interesting."