WALKING KOKODA - ONE STEP AT A TIME 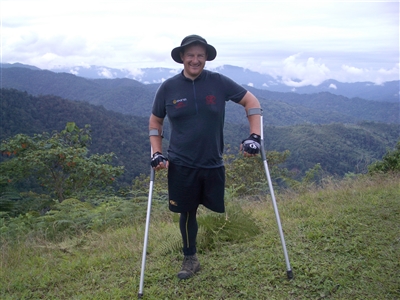 Michael Milton learned many things during the eight days he took to walk the Kokoda Track. But it was an innocent game of soccer with some children on day four that almost ended his trek.

"I hurt my toe!" said the champion skier, who conquered the track in November 2006. "It may not seem like a big deal but, when you have only one foot and four days left to walk, a sore toe can literally put you on your butt."

Milton survived his injury to complete the track in nine days, one ahead of schedule and alongside Queensland's Robyn Sanewski, winner of the Coca-Cola Community Awards. The pair was an unlikely match. While Milton is a world champion athlete who has travelled the globe competing since he was just 14, Sanewski is a mother of four who has long struggled with her weight. The journey to walk the Kokoda Track was her first overseas trip.

But Sanewski and Milton share one very important trait: determination.

Already a keen skier at nine when he lost his left leg to bone cancer, Milton was soon back on the snow and dreaming of representing his country. He did just that at 14, competing in the first of five Paralympic Games. Just four years later, he won Australia's first ever winter gold medal and in 2002 at the Salt Lake City Paralympic Games, he realised his dream of winning all four alpine races. His international medal tally is impressive: 34 in total, 12 of them gold.

Looking for a new challenge, Milton took up speed skiing in 2003. In his rookie year he broke the world record for an athlete with a disability and has broken it every year since. In April last year he broke the open Australian record, clocking a staggering 213.65km/hr.

Sanewski's achievements may not seem as grand but they are no less remarkable. At her heaviest, she was 179kg. By the time she started walking Kokoda, she'd shed 50kg.

Four years ago, her weight struggle motivated her to develop a program to encourage local children to live more active, healthy lives.Fit for Life is an after-school physical and nutrition activity program for children ranging from five to 15 years of age. It encourages physical activity and teaches children to make healthy food choices. Nominated for a Coca Cola Community Award, Sanewski took out the national title and received a grant of $10,000 for Fit for Life. She also won the trip to walk Kokoda with Michael Milton.

"It was demanding and exhausting. At times I really didn't think I'd make it to the end. It took a couple of days to acclimatise to the humidity and the conditions, but everyone on the trek was so encouraging and I wasn't going to let them or myself down by giving up," said Sanewski.

Kokoda was Milton's third trek in as many years, having completed the Milford Track and also reaching the peak of Mt Kilimanjaro.

"Kokoda presented a whole new environment for me. It was so hot and humid, so far removed from the alpine weather I am used to. It was really tough but knowing what the Australian soldiers went through all those years ago keeps you going," said Milton.

He had little trouble with the river crossings and the steep muddy slopes, despite walking the length of the track on crutches but he claims that, in some ways, they helped.

"Moving around on crutches is very natural for me and I had no problems at all. In fact the crutches are often an advantage because I can swing over hazards that others have to walk through. Still, I was the first to go down and I did it on camera so everyone at home has had a good laugh. The mud is a killer though. It's thick and deep and sticky and I lost my crutch tips a few times. The mud just sucked them right off," said Milton.

He said he can't praise the porters and guides enough and raved about their bush skills and their willingness to help.

"These guys can light a fire in the rain, dry your socks in a torrential downpour and carry 25kg of gear over a slippery two centimetre wide stick above a raging creek without falling off. They fell in the mud just as often as I did though so that made me feel better.

"In the spirit of the fuzzy wuzzy angels from World War II, they would do just about anything to ensure we made it to the end of the trek. One guy even carried a guitar so they could have a sing-a-long at the end of each day to cheer everyone up after a hard slog," explained Milton.

He said two things impressed him about the terrain. The first was the altitude. Having spent much of his life in ski fields, Milton was dreading the oppressive heat and humidity but on day three the group camped near the top of the Owen Stanley Ranges, at 2190m where the temperature was just 13 degrees Celsius.

"That was a huge relief after those first couple of days. I could have done with a jumper which I didn't even think to take. Who knew it could be cold in the jungle?" Milton said with a laugh.

A few days later he cooled down with a swim in a creek.

"I was so hot and the water was freezing. I was the only one in our group brave enough to go in but I would much rather be cold and clean than hot and dirty!" he said, still laughing.

He was also surprised by the length and gradient of some of the hills.

"I knew it would be steep but I really had no idea. We often slogged it uphill constantly for three hours. And when I say uphill, I mean it was really steep. It was physically draining and all I could do was put my head down and keep going. I really enjoyed those more technical parts of the trek though when I had to think about every step. I felt great when I reached the top," said Milton.

According to Wayne Weatherall, the Trek Leader from Kokoda Spirit, the track is always testing but Milton and Sanewski handled it very well.

"It never ceases to amaze me how every group I take out tackles the journey with such determination. Robyn and Michael were no exception. Michael did incredibly well to handle the wet conditions on crutches and is an inspiration to us all."

Sanewski and Milton walked out together on the final day.

"I wouldn't swap this experience for anything. It was incredible and despite how hard it was, I'd do it all over again. Michael was a true inspiration - he's an amazing man and I feel privileged to have walked alongside him," said Sanewski.

"I'd love to do Kokoda again. It was a great challenge. I think Robyn and I proved that anyone can do it given the right support and some dogged determination. Maybe next time I'll be a little faster," said Milton with a grin.

The Coca-Cola Australia Foundation is committed to the health and wellbeing of Australia's youth, and through initiatives such as the Coca-Cola Community Awards, is able to reward those who have or are currently promoting a healthy and active life amongst young people in the community.