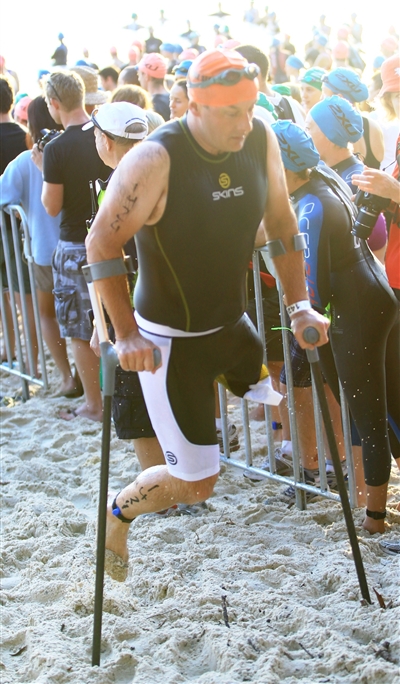 Friday 2 September 2011: MICHAEL MILTON will again don the green and gold for Australia when he takes on the world's best at the Paratri World Championships in Beijing on 9 September.

Milton, who has already represented Australia at five Paralympic Games as a skier and one as a cyclist, also holds the Australian speed skiing record at 213km per hour. He competed in his first triathlon just six months ago and is one of four athletes with a disability to be selected in the Australian team.

Milton lost his leg to bone cancer as a nine-year-old and went on to become Australia's most successful winter athlete. He then beat oesophageal cancer to be selected in the Australian cycling team for the 2008 Beijing Paralympic Games. In October last year he was set to compete in his first triathlon in Noosa but a cycling accident fractured his spine, ribs and shoulder blade and put him in hospital for a week and in a back brace for six.

Triathlon will debut at the 2016 Paralympic Games in Rio but Milton is quick to point out that racing there is not on his radar.

"I will be 43 by then so I think that's a very long shot. I like being involved in a developing and growing sport though and I'm really looking forward to competing in Beijing," said a beaming Milton.

The sprint traithlon for athletes with a disability comprises a 750 metre swim, 20 kilometre ride and a five kilometre run. Milton doesn't use a prosthetic leg, preferring instead to run with crutches.

"My competitors will all use legs for the cycling and running. They will definitely leave me behind in the run, I'm hoping to hold my own on the bike and I should be very competitive in the water. Where I hope to make the most time is in transition where everyone else will have to take off or put on a leg," explained Milton.

He admits to being a little concerned about the water quality in the lake outside Beijing.

"I'm not really looking forward to it. My plan includes keeping my mouth closed and getting out as soon as I can."

After Beijing the next event on the triathlon calendar is the Noosa Triathlon on Sunday 30 October.

"It's the one that got away last year," says Milton. "It took a long time to recover from my run-in with the garbage truck but being in Noosa will close that chapter."