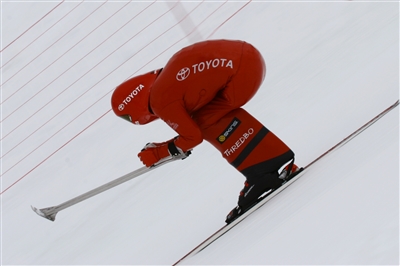 Australia's fastest skier, Michael Milton, will start what's expected to be the most spectacular race at the 2007 Signage One National Capital Cup, with some Personal Water Craft (jet skis) likely to reach speeds over 130km/hr.

The event on the February 3-4 on Regatta Point, Lake Burley Griffin in Canberra will host the best PWC riders from across Australia, including several Australian national champions and no less than four world number one riders.

Milton, who set a new world and Australian speed skiing record in 2006, clocking an amazing 213.65km/hr, says he is looking forward to seeing how fast the ski riders can go.

"I love seeing people push the limits. There are some clear parallels between racing jet skis and speed skiing and I'm keen to have a chat with a few of the faster competitors. I'd like to have a go as well and may even get to hop on the back of a ski during a practice session," said Milton, smiling.

Canberra first hosted the Signage One National Capital Cup in 2006 and this year the size of the event has more than doubled to a three day format. Race classes range from 'Rookie' through to 'Pro' both on runabouts (jet skis on which riders are in a sitting position) and pole skis (standing). This year's schedule also includes the Junior 800 ski riders with four of the country's best juniors (12-15) going head to head, including world number four Luke Day from Queensland.

Milton will start the 'Pro Open 1200 Runabout' race at around 10.15am on Saturday 3 February. It will feature some of the quickest PWCs in the world. With their four-stroke engines producing over 400Hp, these skis are capable of reaching speeds in excess of 130km/hr, with an acceleration rate of 0-100km/hr in less than1.9 seconds.

"That's pretty crazy on water," said Milton. "I do 0-100km/hr in 3.2 seconds so these guys are almost twice as fast as me at the start. That would be a huge rush. Snow has a lot less friction than water though so I just keep accelerating but I would love to feel that initial blast of speed."