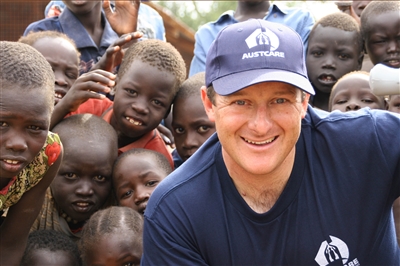 Michael Milton will feature in a television advertising campaign for Austcare, the first for the international humanitarian aid organisation.

The advertisement will go to air on SBS TV on 21 January and run for six weeks until early March. It is the first time Austcare has invested in television advertising to promote their cause and to call for donations to help fund the many programs they run in 30 different countries across the globe.

Milton travelled to Africa in September 2005 to climb Mt Kilimanjaro and, while there, visited Kakuma Refugee Camp in northern Kenya where Austcare funds a number of vocational and educational programs.

"I was overawed by the sheer number of refugees in the camp, around 90,000 at the time. If it weren't for organisations like Austcare, they would have nothing to do and nothing to look forward to. Funding from Austcare has helped set up courses in dress-making, masonry, agriculture, carpentry and computing.

"This sort of assistance gives refugees hope. They look forward to a time when they can go home and help to rebuild their communities or perhaps get a job if they are repatriated to somewhere like Australia," said Milton.

In the advertisement which makes use of much of the footage shot by Milton and his crew while in Africa, he calls for people to make small donations that can genuinely change lives.

"As little as $50 can help someone to start a small business and become self-sufficient and the flow-on effects of that in a community can be enormous," said Milton, one of Austcare's official ambassadors.

For more information or to make a donation, go to www.austcare.org.au