Back in the Green and Gold 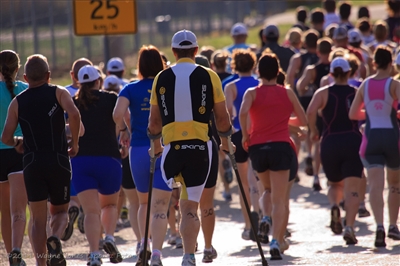 MICHAEL MILTON will once again compete for Australia, this time in triathlon at the 2011 World Championships in Beijing in September.

The six-time Paralympian and world record speed skier is one of four athletes with a disability in the Australian team.

After a sterling career as a ski racer, winning 22 international medals over almost 20 years, Milton switched to cycling and then beat oesophageal cancer to be selected in the Australian cycling team for the 2008 Beijing Paralympic Games. He took up triathlon last year and was due to compete in his first event, the Noosa Triathlon, at the end of October but a cycling accident put him in hospital for a week and in a back brace for six. He fractured his spine, ribs and shoulder blade.

Milton finally competed in his first sprint triathlon in February and has since completed two more. His current personal best time of 1:36.36 would have put him in seventh place at last year's World Triathlon Championships. The sport will debut at the 2016 Paralympic Games but Milton is quick to point out that racing there is not currently on his radar.

"I will be 43 by then so I think that's it's a long shot. I like being involved in a developing and growing sport though and I'm really looking forward to competing in Beijing," said a beaming Milton.

Now a father of two, he said his motivation to train and compete has changed since his second cancer diagnosis.

"It's less about winning and more about my health these days. Competing gives me the motivation to train and I'm hoping that being fit and healthy will keep the cancer monster away. Plus, competition has always been a part of my life. It's hard to let that go and why should I?" said Milton.

"Compete against who? I haven't found another one legged triathlete in Australia yet so when I race it's just me against the clock. That's okay but when the opportunity to race internationally against other amputees came up, I couldn't resist. I haven't completely lost the will to win," Milton said.

In an effort to encourage more people with disabilities to take up the sport, Milton has set up a Facebook Group called Paratri Athletes Australia. He is also recruiting other amputees for a mountain biking team called Amped.

"Triathlons and mountain biking: It's all good fun but I am much happier when I have someone to compete with or against. At this stage in both sports' development, we all have to find each other and I'm just trying to play my part in that," said Milton.