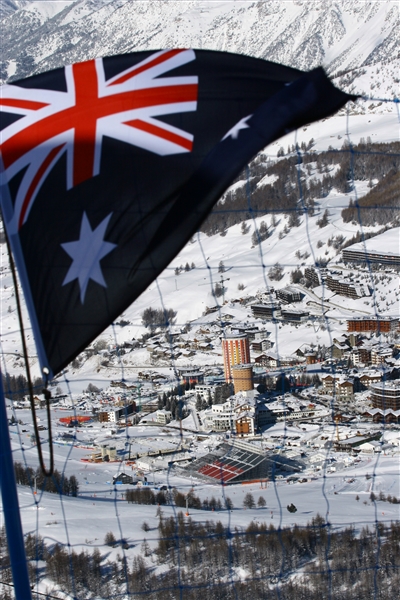 TORINO, Italy, March 9: FIVE-TIME Paralympian Michael Milton will carry the Australian flag for the Torino Paralympics Opening Ceremony at the head of the largest Australian team to ever compete at a Winter Games.

Milton , 32, put Paralympic winter sport on the map in Australia by becoming the first skier to win a gold medal in either Paralympic or Olympic competition with his Slalom victory at the 1992 Albertville Paralympics. He has since won five more gold medals - the slalom in Lillehammer in 1994 and the downhill, Super-G, slalom and Giant slalom in Salt Lake City in 2002 - plus two silvers and two bronze.

A single leg amputee, Milton was flagbearer for the six athletes who competed in Salt Lake four years ago and he will be flagbearer tomorrow night (Friday 7pm Italian time, Saturday 5am, Sydney time) for the ten athletes in the 2006 Winter team.

``It's an incredible offer twice over,'' Milton said. ``Opening Ceremony is a special time of the Games when you really feel nervous and things kind of hit you because you know the whole thing has started. To be leading out your country in front of a big crowd is a great experience.''

Chef de Mission and CEO of the Australian Paralympic Committee, Darren Peters, said it is 'totally appropriate' that Milton carries the Australian flag.

``He is such a talented skier and a dedicated athlete, who is known and respected across Europe and North America.''

It will be Milton's last Paralympic Games in a career spanning almost 20 years. And, although he won all four gold medals in the alpine events at the 2002 Paralympic Games in Salt Lake, changes to the classification system mean he is looking for 'one medal, any colour' at these Games.

"I just want to come home with metal around my neck for my last Paralympic Games," he said.

Milton 's teammate and friend, Shannon Dallas, was chosen as team captain, a role Milton filled in Salt Lake in 2002. Dallas, 28, Australia's only sit-skier in Torino. He has had his best season in the 2005-06 northern winter gaining his first podium finishes in international racing, including a European Cup title in Super-G and finishing third overall for the European Cup season. He is also currently ranked fourth in the world for downhill in his `sit-skier' category.