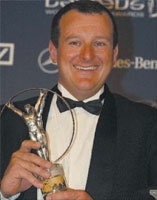 Australia 's fastest skier and Canberran favourite, Michael Milton, has been chosen as ACT's Australian of the Year for 2007, ahead of the likes of Wallabies Captain, George Gregan.

Canberra born and bred, Milton accepted the award, and thanked his partner of five years, Penni Lewer, his parents and other members of his family who attended the awards.

"It's the first time in over a decade I have been in Australia at this time of year so it's great to be here and it's a wonderful honour. I feel so proud to be Australian and a Canberran. It was such a surprise. Australia Day 2007 will be my first inAustraliafor many years, my first with my new daughter Matilda and now it will be even more interesting," saidMilton .

A big rugby union fan,Miltonspoke to Gregan after the ceremony.

"He was great. He came up and congratulated me and we chatted for a while. I've met George before and have a lot of respect for him. I think if he had won I would almost have been as pleased," saidMiltonwith a grin.

ACT Chief Minister, The Honourable Jon Stanhope MLA, announced the award recipients at a special event at the National Gallery ofAustraliathis evening, congratulating all finalists for their inspiring achievements. Three other awards were also announced: Senior Australian of the Year, Young Australian of the Year and Local Hero. All four recipients are now eligible for the respective national award, up against finalists from the other seven states and territories.

The National Australia Day Council said the nominations received from the ACT for this year's awards covered a wide range of achievements and contributions.

"We were really pleased with the number of nominations we received from the ACT for this year's awards and were also very impressed with the many 'quiet achievers' who were nominated for giving so much to others," said Tam Johnston, Australian of the Year Awards Manager for the National Australia Day Council.

"Whether its achievements on a grand, public scale, like Michael Milton, lifelong contributions like Beverley Orr and Dr Price or life-changing commitments like John Van den Dungen, we can all draw inspiration from these great Australians"

The 2007 Australian of the Year Awards will be announced by the Prime Minister in Canberra on 25 January.

AUSTRALIAN OF THE YEAR - ACT

Michael Milton says that having only one leg is not an obstacle, it's just part of who he is. In April 2006, in France , Michael set a new open Australian speed skiing record, clocking an amazing 213.65km/hr. He is now the fastest Australian skier ever and first person ever with a disability to ski over 200km/hr. He is a twelve times gold medallist in six Paralympics and six World Championships, and a champion for children's charities. Michael has been skiing the slopes since he was three and doing it on one leg since he lost the other one to bone cancer when he was nine. His achievements between then and now are truly remarkable. He was a Paralympian at fourteen. At the 2002 Salt Lake Games he won a clean sweep of all four alpine skiing gold medals, and that same year was named World Sportsperson of the Year with a Disability. Michael has overcome his natural shyness to become a talented public speaker. He has achieved at the highest levels and never stops planning to meet the next challenge.

SENIOR AUSTRALIAN OF THE YEAR - ACT

Dr Price's commitment to education can be seen in her career as a primary school teacher, principal, university lecturer, Indigenous education consultant, and curriculum writer. The list of advisory and consultative committees and education bodies she has contributed to over the past forty years is very extensive. She has lectured at tertiary levels in Queensland and now at the University of Canberra . Kaye has worked tirelessly on improving the educational experience for Indigenous school students through her investigations of pragmatic learning environment programs and her examination of the relationships between school outcomes and Indigenous students' positive self identity. Kaye certainly practises what she teaches. As proof that learning and education is a life-long process, she graduated in 1995 with a Master of Education from the University of South Australia and this year was awarded her doctorate by the ANU's Centre for Cross-Cultural Research. All this while balancing a family support role.

YOUNG AUSTRALIAN OF THE YEAR - ACT

At the age of eleven, John Van den Dungen left his rural environment to come to Canberra for a new start. Struggling to fit in John did a stint in a reform home and then fell in with the wrong crowd. By eighteen, he was on remand, spending a month in Goulburn prison, which he describes as the "gates to hell." John's decision never to go back there turned his life around. Now he helps other young people facing troubles like those he faced with sheer determination. He became the coordinator of The Connections, a community-run organisation providing peer support to people trapped in a cycle of drugs by offering them a new path, one that John is following also. Through his work, John has emerged as a young man with the enthusiasm and a passion to make a positive difference to the lives of other Indigenous youths.

Beverley Orr cares for kids, literally. For almost thirty years she has opened her heart and her home to children in need of care, whether it's for a day or so or for weeks. Beverley's contribution to the welfare of children hasn't just centred on the Orr home. She was one of the co-founders of the ACT Foster Carers' Association and still holds the office of vice-president. She has taken her work to the national level through her presidency of the Australian Foster Carers' Association. Beverley is currently on the ACT Children's Services Council and is Deputy Chair of Families Australia. All this while working full-time in Parliament House, being a Guide Leader for the past fifteen years, and being only the second woman to be awarded life membership of the YMCA Sailing Club. While she promotes the welfare and care of children throughout Australia , Beverley remains our local hero.