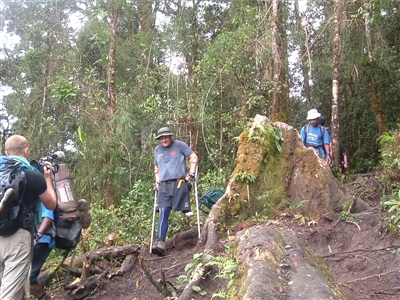 Michael Milton, Australia's fastest skier, today completed the gruelling Kokoda Track one day ahead of schedule and already looking for another challenge.

Milton, who earlier this year broke the Australian open speed skiing record with a run at 213.65km/hr, said he enjoyed the trek and hasn't ruled out walking it again in 2007.

"It was easier than I expected and not as hot which was a real blessing. At the top of theStanleyRangesit was a lovely cool 11 degrees which was a bit of a surprise. Other days down in the jungle slogging it up some really steep hills were much hotter and tougher but I still enjoyed it.

"It's a fascinating place and I would love to go back to learn some more about the history and maybe finish a little quicker," saidMiltonwith a grin.

He walked the track as part of his ambassadorship of the Coca Cola Community Awards in the company of Robyn Sanewski from Biloela inQueenslandwho won the trip and a $10,000 grant for her "Fit For Life" program which she runs in her home town.

"The Coca Cola Community Awards aim to reward those who promote a healthy and active lifestyle to young people. Robyn is a worthy winner. She runs an after-school physical and nutrition activity program for children ranging from five to 15 years of age," explainedMilton.

The pair walked the gruelling 96km track in just over eight days - an impressive feat given the often wet and very humid conditions. They describe it as the 'experience of a lifetime'.

"Kokoda presented a whole new environment for me" saidMilton. "It was so hot and humid, so far removed from the alpine weather I am used to. It was tough, really tough but knowing what the Australian soldiers went through all those years ago keeps you going. You just have to put your head down and keep going."

Robyn started her journey many months ago with a tough training regime and a personal trainer to help prepare for the punishing trip.

"It was demanding and exhausting. At times I really didn't think I'd make it to the end. It took a couple of days to acclimatise to the humidity and the conditions, but everyone on the trek was so encouraging and I wasn't going to let them or myself down by giving up.

"I wouldn't swap this experience for anything. It was incredible and despite how hard it was, I'd do it all over again. Michael was a true inspiration - he's an amazing man and I feel privileged to have walked alongside him," said Robyn.

"The Trail is always testing and it never ceases to amaze me how every group I take out tackles the journey with such determination. Robyn and Michael were no exception. Michael did incredibly well to handle the wet conditions on crutches and is an inspiration to us all."