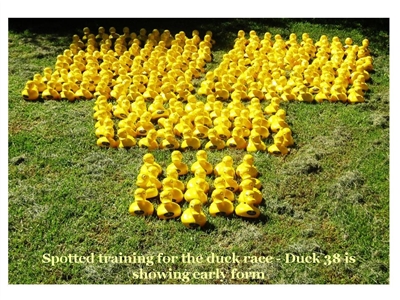 Michael Milton will be signing autographs, judging the team relay and refereeing the duck race at the inaugural Southern Highlands Duck Race Festival on Sunday 27 March.

Organised by the Movement Disorder Foundation, the Festival will raise much-needed funds to support those with impaired movement, including children with spasticity, people with quadriplegia, tics and tremors or paralysis due to stroke or injury.

There will be a jumping castle, face painting, a petting zoo, fire engines, a magician and lots more to keep the kids entertained as well as aerobatics displays by the Flying Cossacks and Sydney Skydivers, models aeroplanes, a silent auction and lots more. And, of course, the exciting duck race which starts at 10.30am.

Go to the Movement Disorder Foundation website to find out how you can help.

Make a donation to the Movement Disorder Foundation.