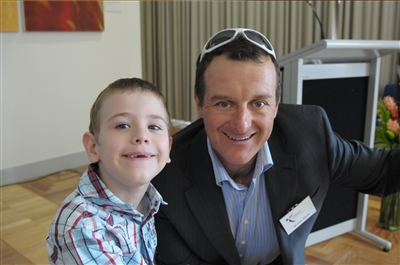 Photo: Michael with Jack (8) who has cerebral-palsy. With a kinetic stander made by TADACT Jack can stand up, straighten his legs and participate at school.

INSPIRED by a little-known group of people who, for more than three decades, have been changing the lives of people with a disability, Michael is now an ambassador for Technical Aid for the Disabled ACT (TADACT).

Over the past 30 years, more than 300 TADACT volunteers with a background in wood, metal, design, computing and electronics trades have designed, adapted or made around 6000 pieces of equipment to make life easier for older people or those with disability.

"I can't ski, can't climb mountains, can't do a lot of things without adaptive equipment. That's why I decided to become a TADACT Ambassador. What they do is important. What they do is life-changing," said Milton.

The organisation recently launched a new website and a new campaign to attract more attention and more donations.

"TADACT helps hundreds of people every year on a shoestring. Imaging the difference they could make with a decent injection of funds," said Milton as he urged people to support the cause.