MICHAEL AND THE BIG PUSH 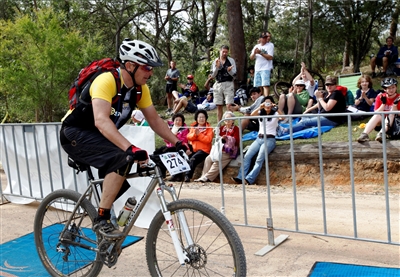 Canberra-based Michael has always loved cycling and, after retiring from skiing in 2006, competed for Australia at the 2008 Beijing Paralympic Games as a cyclist, finishing with two top ten placings.

"I do a lot of mountain biking and I'm always looking for a new challenge. Racing for 70 kilometres through spectacular North Queensland scenery was a real buzz," said Michael.

The ride started in Paluma Village, winding its way through World Heritage rainforest to Paluma Dam, then down into big timber and through open cattle country before finishing at the historic tin mining settlement of Hidden Valley. The course consists of dirt roads, old 4WD tracks and sections of cow pad single track with some climbs and lots of fun down hills.

"I love a good climb but a fast descent is even better," said Milton.

"We were so excited to have an athlete of Michael's calibre participating in this year's race," said Haydn Tilley from Rockwheelers Mountain Bike Club, organisers of the race. "It shows that this event has a rapidly growing national reputation as one of the best mountain biking adventures in the country.

"Michael's participation really added profile to the event and his performance inspired all who rode with him. For everyone involved it is a great individual challenge but also a wonderful social event."

Michael also attended a civic reception in Townsville in his honour on Saturday night.

More information about the Mike Carney Toyota Paluma Push is available at www.rockwheelers.com.

For a map of the route and to read Michael's own report of the ride, go to Michael's blog.