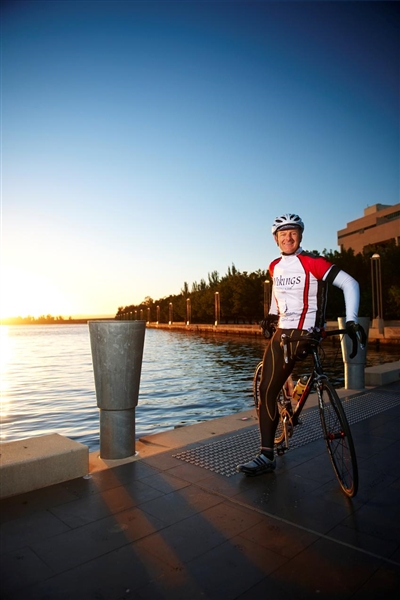 From the White Pages Media Release:

Each year, locals are featured on the covers of the White Pages® directories in recognition of the contributions they make to their communities. Under the theme Courageous Australians, this year directories producer, Sensis, is recognising courageous people who have gone above and beyond the call of duty to overcome adversity and help others in their time of need.

After receiving nominations from community members for the annual honour, Ainslie resident, Michael Milton has been selected to appear on the cover of this year's Canberra directory which is distributed to Canberra, Yass and Queanbeyan.

Michael is one of Australia's most prolific Paralympic athletes. After losing his leg to bone cancer at the age of nine years, Michael's achievements are astonishing for someone with or without a disability. He has competed in five Winter Paralympic Games, netting an unprecedented 11 medals, including a record clean sweep of the alpine events at the 2002 Salt Lake City Games.

After reaching the top of the international Paralympic skiing competition, Michael turned his attention to speed skiing, the drag racing of alpine sport. He holds the world record for a skier with a disability and is Australia's fastest ever skier, clocking a staggering 213.65 km per hour.

In 2007, just before he was due to compete with the Australian team at the World Para-Cycling Championships he was diagnosed with cancer for a second time but 12 months later achieved two top ten placings in the track cycling events at the 2008 Beijing Paralympic Games.

"I like to tackle life head-on. I love to compete and to test my limits. Winning is a bonus. It's an attitude that I believe has helped me in sport and in my personal life as well. My disability has never really stopped me from doing anything," said Michael.

In 2007 Michael was the ACT Australian of the year and in 2002 was named the Laureus World Sportsperson of the Year with a Disability. He has been an inspiration for the greater Australian community, particularly since overcoming cancer for the second time.

Jane Blackley, White Pages® Group Manager, says we felt the Courageous Australians theme was particularly relevant with many parts of Australia having experienced testing times over the past couple of years.

"Australians are known for their compassion and willingness to put their hand up to help when it's needed most. Whether helping to build better community relationships, showing strong leadership, inspiring others, or acting in a major crisis to protect the lives of others, we really wanted to demonstrate the diversity of what it means to be courageous.

"From the nominations received, we were amazed at the many people from all walks of life who have shown tremendous courage, either by risking their own life to save another, overcoming major challenges to inspire others or helping to ensure the wellbeing and safety of the community.

"We felt Michael was a great example of what it means to be a courageous Australian and we are delighted to feature him on the cover of the Canberra directory," said Ms Blackley.

For those who don't live in and around the ACT, check Michael out online at White Pages.