YOUNG LEADERS HAVE THEIR SAY 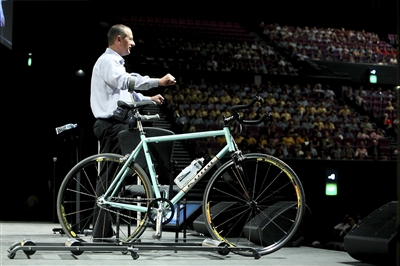 In March Michael spoke to 6500 primary school students as part of the 2010 National Young Leaders Day.

As part of the written feedback after the event, students were asked to nominate their favourite speaker and explain why. Here are just some of the comments from those who chose Michael:

He really inspired me to be a better leader and never give up on things that may seem impossible... and because he was funny.

He's very inspiring and demonstrates you can be different and still live your dreams.

Whatever we can do he can do it just as well.

He is very nice and had a very inspirational story. He shows great leadership. AWESOME!

Even though he lost a leg he still does stuff.

He was an inspirational person. That lit up my heart.

His story was the most inspirational and it made me believe in myself and I now think I am even more capable.

The annual event, organised by the Halogen Foundation, aims to inspire students to lead themselves and others well and challenge them to take their place as future leaders in the nation.

The secondary school National Young Leaders Day will be held around the country in November this year. Get more information from the website www.halogenfoundation.org

Caption: Michael didn't just talk about how he rides a bike with one leg... he showed them.