ON THE BIKE DAY AND NIGHT 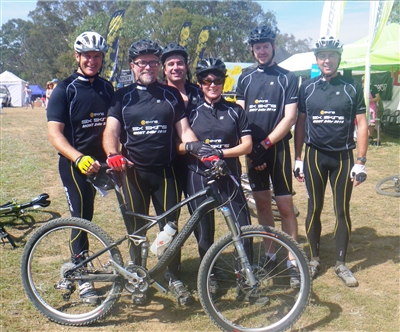 MORE than 2600 riders in 545 teams completed the Mont 24 Hour Mountain Bike Race just outside Canberra and, among them, was rookie Michael Milton.

Michael was the fourth of six cyclists riding in the mixed Six Skins team sponsored by Skins Compression Garments, one of his long-time supporters.

He completed three of the 19.5 kilometre-long laps, helping his team to to an impressive 183rd placing overall and an 18th place in their mixed six category.

Team captain, Craig Martin, said Michael was a key member of the Six Skins, completing all his laps in around sixty minutes.

"A time like that puts him in the top 30-odd per cent of all riders and that's amazing for a guy with one leg. He's bloody awesome, a real inspiration. When you see a time like that you just know he's putting in that much more work," said Craig.

Michael started his second and third laps at 11pm and 3am, with no sleep in between. He completed them in 1:07 and 1:12 respectively.

"Obviously your first lap is bound to be your fastest, when you are fresh and it's light. Those night laps were tough, especially the third one but I enjoyed them none-the-less. It was a real challenge to overcome the fatigue and pretty much back-up with that 3am ride.

"I was all ready for a fourth around 10am but decided I'd done enough. I took my daughter for a quick ride around the kiddies track instead," explained Michael.

Photo: Michael with his Six Skin teammates on Saturday prior to the start of the Mont, the biggest mountain bike race in the world.