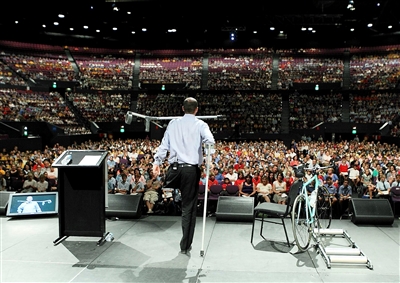 The annual event, organised by the Halogen Foundation, aims to inspire students to lead themselves and others well and challenge them to take their place as future leaders in the nation.

Asked beforehand about speaking to such a large crowd, Michael said he wasn't nervous.

"I really enjoy talking to kids, especially this age group. They are just starting to think about their role in the world and the opportunity to perhaps have some influence in their lives is just too good to pass up.

"Kids are brutally honest and, if you don't grab their attention, they can only be polite for so long. It's instant feedback for a speaker and the beauty of it is that you can adjust accordingly mid-stream.

"You don't really find out what adults think of you until they fill out the survey a week later," said Michael.

There was very little chatter during his presentation which must mean it went well. Eleven-year-old Conor McGrath from Sydney said Michael was the best speaker.

"He showed us how he can kick a soccer ball and told us how he can ride a motorbike with one leg and change gears. It was really cool when he rode his bike on stage.

"Michael's talk made me think about how tough life is and how we shouldn't judge people by their appearance," said Conor.

Photo: Captivating - Michael demonstrates how he carries his skis under his chin. Photo by Paymen Malecki.