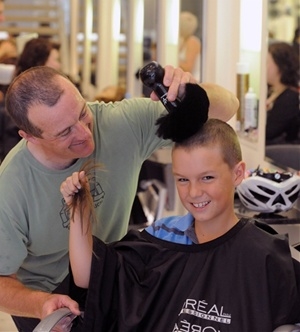 From The Canberra Times by Louis Andrews

YOUNG Hugh McDonald-Crowley showed some serious initiative when he put his hand up for the World's Greatest Shave.

Inspired by a few mates who offered to lose their locks for leukaemia, the 10-year-old Ainslie Primary student raised more than $600, largely through the good will of fellow primary school students.

''Well I had three other friends that are doing it, and two friends did it last year, so I thought I might do it this year,'' he said just before getting in the chair.

His dad Nick was taken with his boy's boldness, so he asked acquaintance, and intrepid gold medal-winning paralympian, Michael Milton to wield the clippers.

The Paralympian was freshly shorn from earlier in the week, and offered some reassuring words before the main event.

''The feeling of the wind through your hair rocks,'' he told the youngster.

Hugh showed a little bit of nerves before surrendering his full head of hair, but after Milton's deft shearing he was stoked with the results.