The face says it all 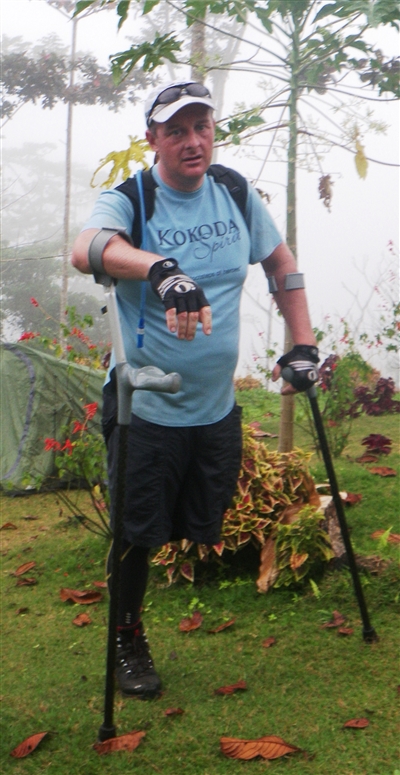 You must be bloody exhausted at the end of each day. Do your shoulders ache? How much harder for you is it than for someone with both legs?

Some of the science says that walking with crutches takes about 1.65 times the energy of walking with two legs. I would like to think I am a little more efficient than that but I also think that this number goes up when on slippery or hilly terrain. In the end it is impossible to measure and I would rather focus on completing the trip successfully than how much harder it is for me than someone else.

Was it tough, especially with the mountain biking before and after the Kokoda trek?

Yes, it was tough. Most commercial trips walk the track in eight or nine days, the fastest commercial trip is seven days and we did it in five and then added three days of mountain biking which made it a very tough trip for me. It is normal for me to push hard on many of my adventures. I often have to push too hard and when I get home I wind up on the couch for a week or two. This time it was more than two weeks with not much energy at all. I also did some damage to the nerves in both my hands thanks to the crutches. More than three months later and, although there has been some improvement, there is still more to go.