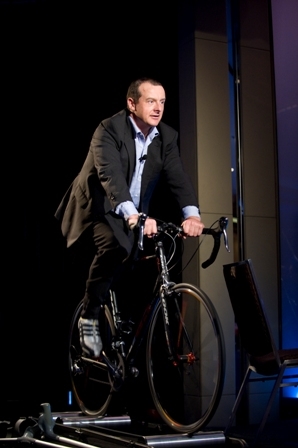 Since Michael took up competitive cycling, there's one question that always seems to come up: "How do you ride a bike with one leg?"

"Of course I explain it and of course people understand but there's nothing quite as effective as showing the audience exactly how it works," said Michael.

Now he takes his road bike and a set of rollers, which he describes as a "treadmill for a bike", to most presentations.

"It's not easy to get on and off the rollers and I often get the wobbles, especially when I first get on and am building up some momentum. There are usually a few gasps from the audience but I haven't fallen off yet...touch wood.

"It's also taken some practice to talk while I'm riding and to make sure I can be heard and understood.

"I believe people respond to it because it's a very real and practical demonstration of one of the things I do plus it emphasises a key message: sometimes things that appear difficult or even impossible are often far simpler and easier than we expect.

"I'm not sure why people think riding a bike with one leg is hard. It's pretty simple..but that's the point. I like to think it not only challenges the audience's perceptions of my abilities but also their own and those around them.

"Now I just have to work out how to demonstrate skiing at over 200km per hour. If they gasp when I wobble on my bike, they'll faint when they see me speed skiing," said Michael with a big grin.

Photo: Michael often rides his bike on stage during his presentation.