THE ART OF WALKING 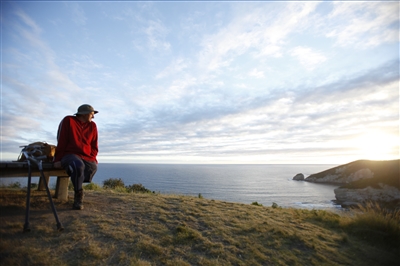 "Awesome scenery, fantastic food, heaps of fun... what's not to like?"

That was Michael Milton's response when asked about the highlights of his walk along Victoria's Southern Coast, and the long sections of trail dubbed The Great Ocean Walk.

Michael spent almost eight days walking as one of three celebrities taking part in a documentary called The Art of Walking. He even got to meet legendary figure-skater Katarina Witt whom he admits to having a crush on in his teenage years.

"Katarina was the 1980s equivalent of Anna Kournikova. I think every teenage boy lusted after Katarina. I managed to hold it together, didn't stutter once," said Michael, laughing.

Teaming up with local Ranger Will Cox, Michael walked 50km in total and camped out overnight.

"It was a more leisurely walk than I'm used to. I didn't have to push hard or grit my teeth and I wasn't completely exhausted at the end. It was a nice change to relax a little and take in the spectacular scenery plus I had some great chats with Will."

The show will be launched in March but, in the meantime, take a look at the website where you could win a holiday worth $20,000 including four days on The Great Ocean Walk enjoying some of the world's most spectacular scenery. But hurry... the competition closes this Sunday 31st January.