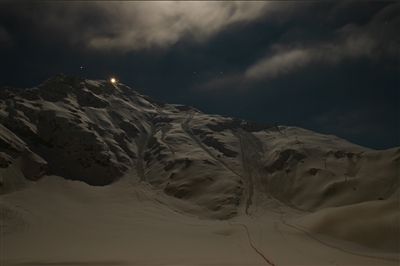 Michael is considering a return to speed skiing in 2011 following news that the world's fastest speed skiing track will re-open.

Les Arcs resort in the Haute Savoire region of France is the steepest, fastest hill in the world and it is there, in April 2006, that Michael became Australia's fastest ever skier, clocking a staggering 213.65km/hr. He also broke the world record for a skier with a disability for the fourth year in a row.

When Michael left Les Arcs after setting the world and Australian record he intended to return the following year.

"But the following year 2007 was a really bad season in Europe with very little snow so I decided to stay home. It was a tough call but the track just wasn't fast and it's a long way to go to go slow. By then I had also taken up competitive cycling and was seriously aiming for Beijing," he said.

A cancer diagnosis and subsequent treatment in September 2007 put all his plans on hold but he fought back and made it to the 2008 Paralympic Games in China as a cyclist.

"During those two years there was a death on the track in Les Arcs and the seasons weren't great so they virtually shut it down. They still offered races there and elsewhere in Europe and Canada but speeds were generally pretty slow."

"I was afraid they would never re-open the track, that the risk of hosting speed skiing was just too high and, once Les Arcs was out of the picture, it would be the end of really fast speeds," said Michael.

But late in 2009 he received an email announcing the Les Arcs track would once again host the French Championships in April 2009.

"The event will be limited to a maximum speed of 190km/hr which isn't that fast but it's a start. Perhaps if they have a good season, they will run a faster event in 2011. I will be watching the news and the results very carefully," said Milton.

He is keen to make good on his promise to John Howard years ago to do 200km/hr plus GST.

"It was a joke at the time and we both got a laugh out of it but I genuinely think 220 is possible given the right conditions, good preparation and a fast track at Les Arcs," he said.

Photo - Les Arcs in the moonlight by Jennie Milton