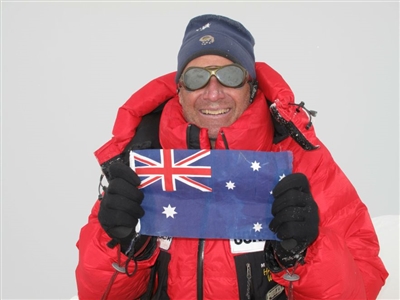 MOUNTAINEER, Andrew Lock, became the first Australian to summit all 14 of the world's highest peaks when he stood atop Tibet's Mt Shishapangma on Friday 2nd October but his elation was short-lived when his descent was delayed by a storm and he was forced to spend the night huddled on an icy shelf at 7600m fearing for his life.

Back home in Canberra Michael Milton and his wife Penni, who offered earlier in 2009 to manage Andrew's publicity, were wondering if he was safe.

"We had this loose arrangement that, if the conditions were right and Andrew felt okay, that he would call us from the summit at around 4pm. We had a few media interviews lined up for him then as well... we waited and we waited but heard nothing," said Michael.

The pair didn't really start to worry until early Sunday morning. With no word from Andrew they started to scan the internet for news of weather conditions on Mt Shishapangma and news of his safe descent.

"At that stage we thought he'd failed to summit, got caught on the mountain somehow and was taking his time getting down. Media kept calling for updates but we had nothing to give them," said Michael.

As it turned out, Andrew had reached the summit on Friday much later than expected and with bad weather closing in. He and his climbing partner barely had time to shake hands and take a few photos before starting their descent. A storm caught them though and with no visibility, the pair chose to spend the night on the mountain.

"We realised we were stuck in a pretty serious situation," explained Andrew. "We hacked a ledge out of the snow with our axes and just sat (there) for ten or 11 hours in the falling snow, the blowing wind and the bitter cold, about -20 to -30 degrees celcius. No tent, no stove, no sleeping bags so sat on our packs for a little insulation.

"Our big fear was being caught by oedema or high wind. It was the toughest, coldest night I've ever had. If the weather had turned any worse we'd probably still be up there on that ledge. We're lucky to have made it back down," explained Lock, from the relative safety of Advance Base Camp, breathless and desperately in need of rest.

The pair feared they would die on the mountain but made it through the night and, at first light, resumed their descent, finally reaching Advance Base Camp on Sunday afternoon after another night on the mountain.

"As it turned out, Andrew had sent us a few SMS messages from his satellite phone during their descent. We didn't get any of them so were pretty worried. When he finally reached Advance Base Camp and called us on Sunday afternoon we were very relieved to hear from him," said Michael.

It was the third time Lock has attempted to summit Mt Shishapangma, the lowest of the 14 '8000ers' but one of the most technically challenging.

"The summit was absolutely fantastic but Shishapangma, at the final peak, didn't come easily. It made me fight for it every centimetre of the way which is probably a worthwhile thing," said Andrew.

Lock is back at work in Canberra now and, despite the experience on Mt Shishapangma, he still has one more goal before he hangs up his ice axes. He plans to conquer Everest for the third time in March 2010 but this time solo and without the aid of oxygen.

You can hear Andrew's incredible story first-hand. He is an accomplished and popular speaker. Book him now for your next event, launch, dinner, conference or meeting. Just call Penni on (02) 6230 0651.