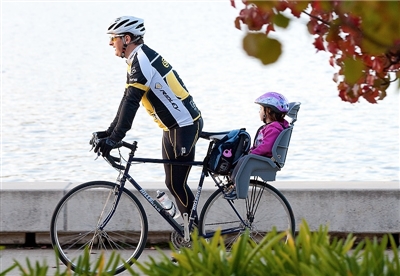 It will be a long weekend in the saddle for Michael Milton, taking part in two cycling events for different cancer charities.

On Friday 30 October, Michael will be in Bega on the NSW south coast with his three-year-old daughter Matilda where together they will ride in the tenth annual Bandanna day Bike Ride.

According to event organiser, Andy Willis, entries are rolling in.

"It's always a great day out and it's a very special year for the event, made even moreso by Michael's involvement. This is a golden opportunity to ride alongside a fantastic Paralympian," said Willis.

Milton has a host of reasons for taking part in the ride, not least of which are a few choice hills.

"I know firsthand what it is like to be a teenager going through cancer and how much peer support from a group like CanTeen can help. I also love to ride my bike, especially with my daughter.

"Raising money for a charity that I believe in, riding my bike through a beautiful part of the world and meeting other people who are there for the same reasons sounds like a great day to me. I also hear there are some really fast descents so that will be fun too."

Riders can register as individuals or as part of a relay team. The ride starts in Littleton Gardens in Bega and travels to Merimbula on the Princes Highway. Lunch will be provided at the Merimbula Imlay Bowling Club before riders saddle up for the return ride to Bega.

On Sunday Milton will be back in his home town of Canberra to ride inFitz's Challenge, but this time he will have to leave Matilda at home.

Now in its 22nd year, Fitz's offers various levels of difficulty, with Milton choosing the 165km Classic Challenge, described on the website as a "..daunting ride with enough hill climbing to give even the most seasoned rider a reason for pause".

Milton will ride as part of the Charity Cranks team, a group of social riders who raise money for charity by entering challenging cycling events. On Sunday they will be supporting the Oncology Children's Foundation, which funds research into Childhood Cancer.

To support Michael Milton and The Charity Cranks, donate to OCF at www.charitycranks.org or www.ocf.com.au