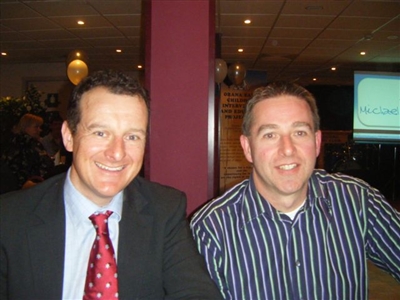 THE FEEDBACK from a recent presentation Michael gave as part of the 25th birthday celebrations for the Orana Early Childhood Intervention (OECI) centre in Dubbo was overwhelmingly positive but, for Michael, it was completely over-shadowed by the stories of parents with children who attend the centre.

"I speak at a lot of these types of functions and come into contact with many non-profit organisations and, although I'm always impressed by what they do, I guess my disabiility has made me a bit of a hard-nose. It takes a lot to move me to tears.

"But the stories I heard that night and the people I met who work for the centre - some as volunteers - really impressed me. It was a real honour to be able to add something to their celebrations and feel that I contributed to their cause in some way," said Milton who admitted being a little emotional when friend and OECI board member, Anthony Barnes and his wife Marie showed footage of their young son Joey water-skiing.

"Those physical achievements really resonate with me because I know how important sport was to me and my rehabilitation after losing my leg to cancer at nine," said Milton.

Although the centre caters for children aged up to six years of age who have a moderate to severe disability, Milton said he identified with each of their journey's and also that of the parents.

"Having one leg is considered a mild disability and yet the various challenges for me and for my parents sometimes seemed insurmountable. I can imagine the trauma, worry and anxiety parents and kids go through and the centre really is a port in a storm, particularly in those early days."

Orana Early Childhood Intervention is a family centred service, endeavouring to meet the needs of the family as a whole, not just the child as an individual. Families are an integral part of the Early Intervention Team and are resourced to become their child's primary intervention worker.

The programs include education, physiotherapy, occuptational therapy and speech pathology, as well as a counselling service. The centre provides education and therapy to children and their families residing in Dubbo and the Orana Far West Region of NSW, an area covering some 40% of the state.Approximately 150 children and their families benefit from the service each year. It receives enormous support from the local community.