MICHAEL MILTON ON THE SQUIZ 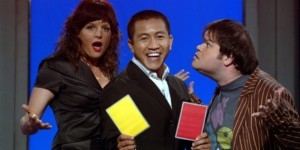 THE SQUIZ airs on SBS every Saturday at 8.30pm. Michael Milton will be one of the show's guests on Saturday 29 August. Mark it in your diary NOW!

CitySearch review by Patrick Tangy, May 2009:

In a nutshell, The Squiz is to sports as Spicks and Specks is to music. Hosted by the wonderfully charismatic Anh Do, the show follows a similar format: two team captains (Amelia Jane Hunter and Jordan Raskopoulos) have to choose who they want on their team (just like in school yard footy). Unfortunately, only four out of the five hopeful contestants will be chosen, with the fifth being benched and relegated to the role of score-keeper until they are subbed in - mind you, the contestants, who comprise mostly Australian sporting heroes, probably aren't used to being left out of the game...

..Do is at his likeable best in this show, and it is obvious that he's a sports nut. The main gripe is that the flow isn't quite as smooth as other quiz shows of this format, but that is something that should hopefully evolve over time. Otherwise it is fast-paced, fun and very funny as the contestants and captains battle, tackle and touch on sporting pop culture.