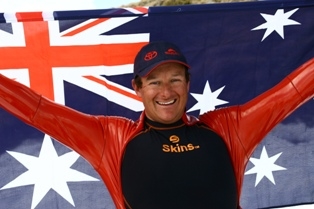 Michael Milton is not only the world's fastest skier with a disability but he also holds the Australian record for the fastest on-snow run ever...regardless of the limb count.

In April 2006, just weeks after he'd competed in his fifth Paralympic Games, Milton stood atop the fastest hill in the world and, about two minutes later, laid claim to the 15-year-old open Australian record.

Now retired, Kirshner says he and 'Milto' are mates and he's been following his progress as he edged closer and closer to the Australian best.

'Last year he called me to say he'd done it, he'd smashed my speed. The bugger was only joking but it took my breath away,' said Kirshner. This time, on the other side of the world, Milton thought he may have a job convincing his friend.

'He knew I was fair dinkum this time. He'd been watching the weather and the snow conditions. He knew it was fast and he knew it was on. Nick's a nice guy. He just said "About bloody time",' laughed Milton.

ONE LEG IS FASTER THAN TWO RIGHT?

It's a question Michael hears all the time. As he says 'You cut body parts off, you should go faster.' Well, i...
Read More

Michael Milton had never tried speed skiing when he packed his bag and headed for Sun Peaks in Canada to compete in ...
Read More
Site Map
Our Community
Facebook LinkedIn Twitter YouTube